Venue: online (information will be provided to registered participants) 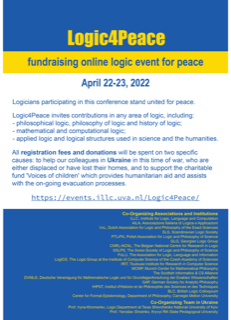 Logicians participating in this conference stand united for Peace. The on-going Russian military invasion in Ukraine is causing death, destruction and it is the direct cause of a gigantic humanitarian crisis. Educational facilities have been hit, supply chains have been broken and people have lost their families and homes. By organizing this conference, we offer our moral and financial support to our colleagues in Ukraine in this time of war.

This event is used to collect financial aid for two specific causes:

As the world urgently needs more logic and rationality, Logic4Peace creates a platform for logicians from around the world to present their work in any area of logic, including:

We welcome participants from all nationalities to submit an abstract (*). We welcome new ideas as well as on-going work and reports about already published results.

All participants are asked to register for the conference. The registration fees will be entirely used to offer financial aid to Ukraine to help our colleagues and Voices of Children. We invite academic institutions and organizations to sponsor this online logic event.

Signed by the Co-Organizing Associations and Institutions: